A Gilera Of Mergers, Acquisitions and Restoration, Celebrates A Jubilee

A cup of strong black coffee awaits me—wafts of Arabica rising gently into the air—as I read the email that my friend and owner, Chandan Basu Mallik, of our current topic of discussion has sent me. I cross-reference my friend’s words with my newfound research. Am I reading this right? I read the lines again and then cross-check with the fabulous range of photographs that my friend and colleague Deepanjan (whose work you see in this article) has sent me. How could Chandan’s Gilera Giubileo have a 106cc engine from the Model 98 SS, housed in the frame that has been confirmed as belonging to a 125?

A quick call to Chandan reveals that the motorcycle, which had been acquired in Siliguri, was restored by him the way he found it. After getting the lucky bargain, research began on the machine—back in 1998 when worldwide wasn’t a web, information was scarce, and things were difficult for Chandan—until he chanced upon a motorcycle sold in the US called Sears, which appeared to be an exact replica. Sure enough, Gilera had in fact exported their motorcycles to the New World using the brand names ‘Allstate’ and ‘Sears’.

The exact origins of his motorcycle remain unknown and there is no record of how the merger between the frame and the chassis may have happened. “We did volumetric tests and found the engine to have a displacement higher than 100cc,” says the man who acquired the bike.

The assumption was that if it was larger than a 100, the engine had to be a 125. Restoration started in earnest in 2008 and Chandan restored the motorcycle as authentically as he could. Meanwhile, the anomaly remained undiscovered…until now, when it was learned that the bike is actually a mix and match.

Although the brand is not as famous as other Italian two-wheeler brands like Ducati, Moto Guzzi or MV Agusta, Gilera’s heritage is just as rich. Between 1950 and 1957, legendary racers like Geoff Duke and Umberto Massetti became World Champions astride 500cc Gileras.

The engine in Chandan’s unique Gilera is a 106cc (106.32cc exactly) air-cooled single cylinder engine mated to a four-speed transmission. Output is rated at 8.5bhp and it could do a top speed of 98 km/h. “On a good day, she’ll outdo a Pulsar,” croons Chandan, stroking the slim black dual seat.

Claims aside, there’s no denying the evidence of cutting-edge technology of the period. Chandan points out an odd little cover at the start of the throttle cable on the righthand twist grip. It hides a thin chain that attaches the cable to the twist grip. “The Italian engineers knew, from their racing experience, that throttle cables are prone to breakage,” explains my friend. Other bits and bobs include the elliptical swinging arm and a tubular frame that used the engine itself as a stressed member.

Finished in vibrant rosso with chequered flag decals running through the centre of the compact fuel tank, this Gilera could do a claimed 100 miles to the gallon (around 33 km/litre). And interestingly it looks racy— despite the fact that its round headlamp and raised handlebar give it a more moped-like silhouette. Chandan keeps it in perfect nick, and a single kick is all you need to get that slightly raspy note out of the Brevettato exhaust.

Chandan’s Giubileo however—of a 1965 vintage—came in the twilight of Gilera’s heyday. The company, founded by Giuseppe Gilera in 1909, had withdrawn from racing after the tremendous success of 1957 and changed tack drastically. Shorn of the glamour and the glory that surrounded the brand, sales of its motorcycles declined throughout the 1960s and by ’68, the proudly independent company had been swallowed by the giant that is Piaggio and there it remains to this day.

As for Chandan’s Giubileo, it keeps alive the glory days of Italian engineering and racing prowess—albeit on a quiet street in distant Calcutta. There aren’t too many of its kind here. For all we know, this could be the only Giubileo in the whole country...not in the least because of its unique combination of a 125 chassis with an engine from the 98 SS. I suppose sometimes the knowledge of a merger only comes after the acquisition. Now for that sip of coffee… 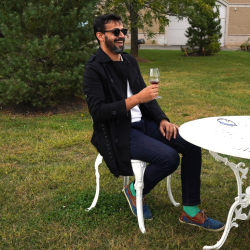